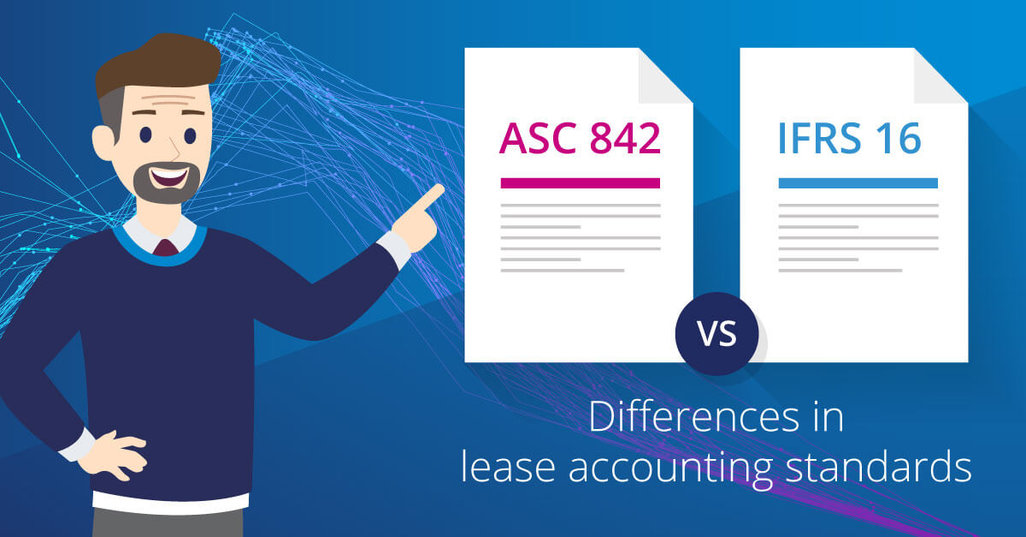 IFRS 16 vs. ASC 842: What are the differences? Read in this blog post, which key differences exist in lease accounting between IFRS 16 and ASC 842 for both lessees and lessors.

Leases are an integral part of today’s business environment. However, lessees did not report most leases on the balance sheet and only disclosed future lease payments in the notes to the financial statements. This has changed dramatically with the introduction of the new accounting standards for lease accounting under US GAAP and IFRS, which require lessees to recognize most leases on-balance.

Non-public companies in the US must adopt ASC 842 for fiscal years beginning after December 15th, 2021. Companies preparing financial statements under IFRS have already applied the IFRS 16 accounting standard in 2019. Although the development of the new guidance began as a joint project, there are significant differences between final standards.

In this blog post, we explain the key differences in lease accounting between IFRS 16 and ASC 842 for both lessees and lessors.

1. Scope and recognition exemptions under IFRS 16 and ASC 842

Only ‘Property, Plant and Equipment’ (PPE) is in the scope of ASC 842.

Under IFRS 16, lessees may also apply the standard to leases of intangible assets.

For such types of leases, lessees may choose not to recognize a right-of-use asset and a lease liability and expense the lease payments on a straight-line basis.

However, under ASC 842 this accounting policy choice applies only to short-term leases.

Under ASC 842, lessees must classify each lease as either

Under IFRS 16, however, there is no distinction between operating and finance leases anymore.

The distinction under US GAAP is relevant for subsequent measurement and the presentation of amortization and interest expense. However, the recognition of a right-of-use asset and a lease liability is required for both operating and finance leases.

Lessees are required to recognize straight-line amortization of the right-of-use asset and interest expense on the lease liability as separate line items in the income statement.

As the total lease expense is higher in the beginning of the lease term, there is a so-called “front-loading effect” in the income statement. This is due to straight-line amortization and decreasing interest expense.

Under IFRS 16, all leases are accounted for as “finance leases”.

For operating leases, lessees recognize a single periodic lease expense in operating activities which represents the allocation of lease payments and initial direct costs on a straight-line basis over the lease term. Depreciation and interest expense are calculated for subsequent measurement of lease liability and right-of-use asset, but they are not presented as separate line items in the lessee’s income statement.

For lessors, ASC 842 distinguishes between the following lease types:

Please read below for additional information on lease classifications:

There are no differences between operating leases under IFRS 16 and ASC 842. Lease payments are recognized as lease income on a straight-line basis over the lease term unless another systematic basis is more representative of the pattern in which benefit is expected to be derived from the use of the underlying asset.

The accounting for sales-type leases is similar to the requirements of IFRS 16 for manufacturers and dealers, including recognition of revenue, cost of goods sold, and any initial direct costs in the income statement when control of the leased asset transfers to the lessee.

For direct financing leases, only selling losses resulting from the lease are directly recognized in the income statement. Selling profit and initial direct costs are deferred and included in the measurement of the net investment in the lease and therefore allocated over the lease term.

More differences between IFRS 16 and ASC 842

Christian Kilschautzky – a former LucaNet employee - successfully completed the Master in Business Administration at Goethe University in Frankfurt am Main and San Diego State University. During his studies, he specialized in accounting and finance, and for his master's thesis he examined conceptual differences between IFRS and US GAAP. Prior to joining LucaNet, Christian gained several years of professional experience in auditing and accounting advisory services. As a consultant at LucaNet, he was responsible for further development of the LucaNet software from a technical accounting perspective regarding consolidation and other accounting issues under German GAAP, IFRS, and US GAAP.

How do you achieve compliance with ASC 842 easily? Read our blog post to find out about the challenges and solutions of the leasing standard.

ASC 842 Leases significantly changes the requirements for lease accounting by lessees. Read this blog post for a concise overview of the key changes under ASC 842.

Digital accounting offers many benefits for various companies. However, many financial professionals have still not digitalized the accounting process and rely on error-prone manual accounting.